European spruce bark beetle (Ips typographus) (ESBB) is native to Europe and parts of Asia. It is considered to be Europe's most destructive bark beetle, able to attack and kill healthy spruce trees when populations of the beetle are high. It has not been detected in North America, however, it has been intercepted with shipments of materials from Eurasia and is considered high risk for establishing in Canada if a sufficient number of beetles arrive without detection. This is because our climate and host trees are suitable for the beetle, and because the beetle is very effective at locating host trees. Because the insect lives under the bark for most of its lifecycle, it will be difficult to detect at early stages of establishment, which limits managment options. The insect is effective at dispersing long distances both naturally and assisted by human activity, and suitable host trees are widely distributed across Canada. If it becomes established here, there is a risk it will become a serious pest of conifer species through the range of spruce.

Biology
Once air temperatures increase in the spring, adult beetles (4.2-5.5 mm long) begin to disperse. The male beetle finds a suitable host tree, initiates attack on the tree and creates a nuptial gallery. The males produce pheromones which attract more beetles (male and female) to the tree. Multiple beetles attacking the tree overwhelm the tree's defensive system (in a similar manner to how mountain pine beetles attack trees). After mating in the nuptial chamber, the female beetle excavates egg galleries under the bark (see photo in sidebar), laying eggs along them. In Eurasia, ESBB often carries fungi with it, some of which are virulent pathogens. European fungal pathogens arriving with the ESBB pose an additional risk to Canadian trees.

Trees at risk
The main host of ESBB is spruce (Picea spp.), but fir (Abies spp.), larch (Larix spp.) and pine (Pinus spp.) are also hosts. The beetle prefers declining, damaged, over-mature (75-150 years old) or newly felled trees. However, when the population of the beetle builds up, they will attack healthy trees.

Current range
Currently ESBB is only known to be in its native range in Eurasia.

Detection
Pitch tubes (tubes of resin) may be seen extruding through the bark of vigorous trees attacked by ESBB. Trees begin to decline and die within a few weeks of attack, with needles turning yellow and then red before falling from the tree. Many small (2-3 mm diameter) exit holes can be seen where newly emerged adult beetles completed development and left the tree. Reddish-brown frass (insect excrement) can be seen in the tree's bark. Beetle galleries are seen when the bark is removed - these consist of a nuptial chamber, with 2-5 longitudinal egg galleries (see photos in sidebar). As with other insects that live under the tree's bark, evidence of woodpecker activity may be present.

What you can do
ESBB is not known to be in North America at this time. Early detection of it provides the best chance to manage it effectively.

If you think you have found European spruce bark beetle in Canada, contact the CFIA Plant Health Surveillance Unit. 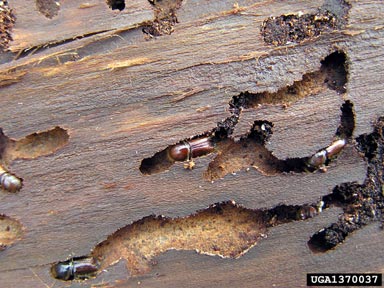