Mountain pine beetle (Dendroctonus ponderosae) (MPB) is a tree-killing bark beetle, native to western North America where its principle host is lodgepole pine (Pinus contorta). Although MPB is native to Canada, unlike other insects featured on this site, the beetle can be considered invasive if it invades new regions. In Canada, its historic range was in British Columbia, with occasional isolated finds in Alberta. An extensive outbreak, occurring since the 1980's, has resulted in an unprecedented population increase of the beetle, resulting in a massive range expansion north and eastward. If conditions are favourable for the beetles, they could continue to expand eastward in range invading the boreal forest, impacting boreal forests in northern and eastern Canada.

Biology
A pioneer female beetle selects the tree, excavating a hole through the bark. Healthy trees defend themselves by producing a toxic resin, flushing the beetle out of the tree (see photo in sidebar). This defense works when a small number of beetles attack the tree, however, MPB can attack the tree en masse, overwhelming the tree's defenses. To do this, the female beetle produces an aggregation pheromone (a chemical signal) which attracts male beetles to the tree. These males in turn produce a pheromone which attracts more beetles, mostly female. These newly arrived beetles also enter the tree, and the large number of beetles attacking the tree overwhelm the tree's defenses.

The female beetle excavates a vertical gallery under the bark along which she lays her eggs. Larvae emerge and feed on the inner bark (phloem) creating tunnels perpendicular to the egg gallery (see photo in sidebar). After spending the winter in the larval stage, the beetle passes through the pupal and early adult stage under the tree bark, emerging in July and August in western Canada. Newly emerged beetles disperse within and between forest stands, usually travelling downwind.

Adult beetles carry blue-stain fungi with them in specialized compartments in their mouthparts. These fungi are introduced into the tree by the beetle when it enters the tree. These fungi, along with the feeding of the beetle larvae under the bark, kill the tree by damaging the tree's circulatory tissue and impeding the flow of water and nutrients. Attacked trees are usually killed within a year.

Ecology
Historically, MPB populations are usually at low levels and beetles are of no economic concern because they primarily infest stressed, supressed or declining pine trees that have limited ability to resist the beetle. Periodically though, populations of the beetle increase. This can happen when trees are stressed and less able to resist the beetle (e.g. drought or disease), or when there is higher survival of the beetles due to milder winters. When this happens the beetles are able to colonize and kill large healthy trees. When the beetle population builds to this point and there is a large area of suitable host trees, combined with favourable weather over several years, there may be an outbreak of the beetle over a large geographic area (e.g. what has happened recently in British Columbia and Alberta).

Trees at risk
Lodgepole pine (Pinus contorta) is the primary host tree, but the beetle can successfully attack and develop in a number of pine species including eastern species such as jack pine (P. banksiana), eastern white pine (P. strobus) and red pine (P. resinosa). The beetles prefer larger trees because they have thicker bark (better protection) and thicker phloem (better nutrition).

Current range
The current range of MPB covers much of British Columbia, northeastern Alberta, and the Cypress Hills on the Alberta-Saskatchewan border, where a population of lodgepole pine exists.

See the current range of mountain pine beetle in Canada.

Detection
Pitch tubes, a combination of pine resin and dust from the beetle's boring activity, with a hole in the centre where the beetle has entered the tree, are seen on pines that were healthy at the time of attack (see photo). Beetle galleries are found under the tree's bark - the main (egg) gallery is vertical, 30 cm or more long, and may have a slight hook at the bottom; larval mines branch off perpendicularly from the main gallery (photo). Larvae, pupae or young adult beetles may be found in the galleries depending on the point in time after gallery construction. Other evidence of MPB are: boring dust in bark crevices at the base of the tree, signs of woodpecker activity, and small exit holes (approx. 2.5 mm across) where adult beetles have left the tree. The adult beetles themselves are small, (5-7 mm long) and dark brown (photo), while the larvae look like very small maggots and are found in the larval galleries under the bark.

Canopies of trees successfully attacked by the beetles will change colour, first becoming greenish-yellow, yellow, red, then brown beginning soon after successful attack (photo). At a stand level, groups of dying pine may be seen, these patches of dead trees grow in size and abundance as the infestation progresses.

What you can do
If you think you have found mountain pine beetle outside of its current range, contact: 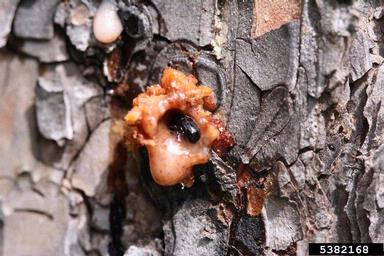