Southern pine beetle (Dendroctonus frontalis) (SPB) is a tree-killing bark beetle, native to the southern and southeastern U.S. Like the mountain pine beetle, it is native to North America, but the beetle can be considered invasive where its range expands into new regions. The beetle's range is expanding northward as the climate changes and winters become warmer. Models predict that SPB could reach Nova Scotia by 2020.

When populations are low, SPB survive on trees that are stressed, supressed or dying. Periodically, SPB populations erupt and they can quickly kill large numbers of healthy pines, making it an ecological and economic threat in pine-rich forests. Outbreaks of the beetle cause significant economic impact at times - between 1999-2002 losses to the timber industry in the southeastern U.S. exceeded one billion dollars.

Biology
Like mountain pine beetle, southern pine beetles mass attack host trees. The first beetle to arrive at a host tree, the "pioneer" beetle, bores into the tree and releases an aggregation pheromone. The pheromone, in combination with volatiles from the host tree, attract more beetles. When enough beetles attack a tree in a short period of time they overwhelm its defenses and the beetles go on to reproduce in the tree (the healthier the tree, the more beetles are required to overcome the tree's defenses). As the tree is colonized, chemical signals shift to show that the tree is no longer suitable for more beetles.

Beetles excavate S-shaped galleries under the bark in which they mate and lay eggs in niches along the side of the gallery. Eggs hatch, and larvae feed in the inner bark creating feeding galleries perpendicular to the parent gallery. Larvae pupate under the bark and the resulting adults chew small holes through the bark to exit the tree. The galleries eventually girdle the tree, and fungal pathogens (blue stain fungi) brought in to the tree by beetles block water flow through the tree and accelerate tree death.

SPB develops quickly, with multiple generations per year in its southern range, allowing for rapid increases in population. In the northern end of their range (e.g. New York), they probably only have one or two generations per year. Winter minimum temperatures are thought to be the primary limit to the northern end of their range. As winters warm, the beetle will likely be able to survive further north than it has in the past.

Trees at risk
All pine species are thought to be at risk. In southern and southeastern U.S. all hard pine species are attacked. In the northeastern U.S. red and Scots pine are hosts; white pine is also attacked occasionally but appears to be an unsuitable host. It is likely that jack pine will also be an acceptable host. It occasionally attacks some other conifer species.

Current range
The SPB's range expanded northward, through New Jersey in the 2000's and in recent years is found as far north as Connecticut, Massachusetts, Rhode Island and southern New York state.

Detection
Pitch tubes are seen on pines that were healthy at the time of attack. They occur when the beetle burrows in to the tree - a healthy tree responds by producing resin at the site of the injury. Pitch tubes are popcorn-sized and dry to a yellow-white, pinkish or brown colour colour (sidebar photo). Pitch tubes will tend to be in crevices in the bark, and anywhere along the tree trunk. Sinuous beetle galleries are found under the tree's bark (sidebar).

Canopies of trees successfully attacked by the beetles will change colour, first becoming greenish-yellow, yellow, then reddish brown before the needles fall off. At a stand level, groups of dying pine may be seen, these patches of dead trees grow in size and abundance as the infestation progresses (sidebar).

What you can do


If you think you have found southern pine beetle in Canada, contact the CFIA Plant Health Surveillance Unit. 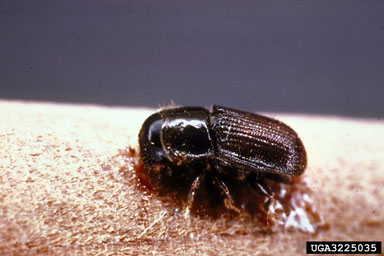